Last summer I embarked on my first canning project (green beans, and peaches), and things have really taken off. It goes hand in hand with adopting paleo, and self sufficient lifestyle changes.


Bartering:
ground beef for venison
helping a friend for elk, and soup bones


Now that I'm looking at this list, I'm feel pretty good about it. I'd like to go into more detail about these different projects. I'm also interested in taking on another project. Next up is.... pineapple vinegar!
Posted by Leslie @ NE Portland Bungalow at 7:08 PM 1 comment: I was looking for a new fermentation project, and found lots of intriguing recipes online.  Most intriguing were the recipes fruit kvass- especially this recipe, from Green Kitchen Stories.

I used frozen blackberries and peaches picked last summer, at Sauvie Island Farms. I added them to a fido jar, added a small scoop of sugar (to feed the ferment) and filled the jar with water. I did not use a started/culture for this batch. I sealed the jar tight, and stored it op top of my freezer in the basement, which is slightly warm. I placed a box over the jar, to block light.

Daily, I checked the jar for fermentation. When fermentation has begun, you'll see some bubbles. If you open your jar, and there is a release of pressure (aka a burp) then you've confirmed the fermentation. The burp may spray. I've heard a few horror stories about ferments exploding, so I'm considering using an airlock for future ferments. But I haven't pulled the trigger.

I tasted the drink daily. After 3 days I couldn't taste the sugar, but it didn't taste like much still. On day 4, we had a little carbonation, and a night slightly sweet, slightly acidic (zingy) taste and mouthfeel. Nailed it!

Other flavor combinations I've tried are pomegranate & orange, and cranberry $ orange. I LOVE the cranberry & orange! I used my kraut smasher to break up the cranberries. I didn't crush any other fruit before fermenting. I also tried a few batches including some whey from my kefir. I personally feel it's not necessary, though I do understand that it gets ferment going faster, sooner. I have also tried some batches with added sugar, and some without. I think the sugar in the fruit is enough to feed the ferment, and added sugar is not necessary. My personal preference is to add about 2 tablespoons of sugar per quart. I've used honey, and white table sugar.

Fermenting more than four days produced a boozier smell and taste, which I did not want. So for me, the sweet spot seems to fall around 3 or 4 days. I made a big batch (half gallon) to serve with Christmas dinner, using orange & cranberry. I fermented for 3 days, then kept it sealed in the refrigerator until I was ready to serve it. It was my favorite batch so far!

Disclaimer: I am not a doctor, not a professional chef, and have no professional expertise relating to this topic. Cooking and eating involves inherent risks! The author(s) of this, and any linked blogs/websites assume no responsibility, or liability for any damages you may experience as a result of the recipe, instruction, or other writings on this blog. This blog is written for entertain purposes only.
Posted by Leslie @ NE Portland Bungalow at 12:59 PM No comments:

One of my favorite hobbies is food prep, storage, and cooking.  I like to take advantage of sales, so I can stock up with big purchases.

Before the Gross Out of 2013, the basement felt cluttered. I was aware it was time to do something about it when the Gross Out happened. We did lose a few things that we cared about, but in the end, we have a organized, and useful basement.

When we put the basement back together, I established our pantry. We have some bulk supplies (nuts, dried fruit, etc) and have been storing food as it comes in season, or goes on sale. For example, this year I made and canned apple sauce, and tomato sauce, stewed tomatoes, peaches, and green beans. I also found a great deal on a vacuum sealer, and have been stocking up on meat as it goes on sale (like brats, salmon, and ground beef) and making beef jerky with a borrowed food dehydrator. I make and freeze broth regularly, and have really streamlined our food prep process.

I just love it. It's fun, it makes me feel like I'm doing something useful, and contributing to us having an healthy, efficient, and frugal lifestyle.

I don't know if anyone reads this blog, but if you're reading, do you have any experience with food storage, or do you have any times for prepping meals ahead of time?
Posted by Leslie @ NE Portland Bungalow at 12:34 PM No comments:

All summer, I watch my tomato plants.

So I bought and planted four more, from the local discount store. Nothing.

Suddenly, five more plants popped up from dirt given to us from a friend. Apparently, there were some seeds in there! 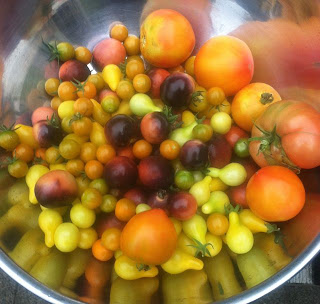 Every few days, I go out with a bowl to pick. Or not a bowl, just a hungry belly.

I pick many that aren't quite ripe- they will ripe on the counter, in a paper bag. Pulling them a little early lets the plant focus on the green fruit. So I have read. On the Internet.

So what to do with all these tomatoes...

Make sauce (I quarter them, throw them in the food processor, and either into a sauce pan, or the slow cooker. Skin on, seeds in (probably why the flavor is so light). I cook off about 50% of the liquid, adding salt, onion, and a little garlic. I'm trying to keep the sauce pretty plain, so I can go more garlic & oregano, or maybe more cumin & garlic when I actually cook with it. 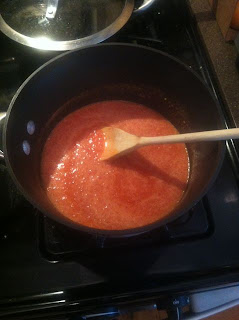 I was going to can it, but instead froze it into cubes.

I've also dried some. I don't really "like" sun dried tomatoes very much, but this seemed like a fun idea. And I'm low on olive oil (perfect timing!), so the dried tomatoes currently reside in the freezer.

I sliced them in half (or maybe sixths, if using larger tomatoes), then squished the guts into a bowl. Some seeds are still in the halves. Is that OK? Is that some sin against all things sun dried? I have no idea, but I'm going with it. 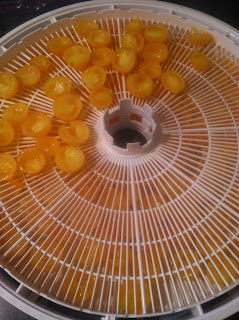 Or, just quarter them up, and toss them into your pan (where you have already been sauteing mushrooms with bacon strips, and ground sauce). Chevre on that? Yes, please! Side of veggies, and dinner is served. 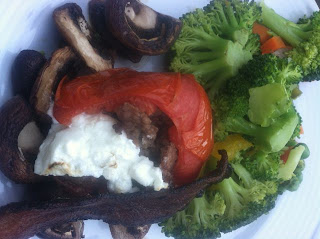 Tomato season. What's not to love? 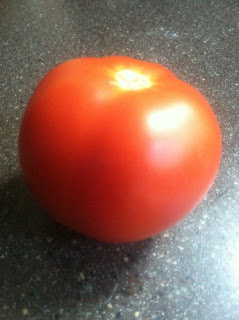 Posted by Leslie @ NE Portland Bungalow at 9:00 PM No comments:

There is an apple tree in our yard. Five years ago, when we bought the house, it had about a half dozen apples. The next year about a dozen, then about 25 and over 35 apples last year. Then I gave it a big pruning. This year we had a bunch of apples- I didn't count this year. But it was maybe a bushel's worth of apples.

The tree used to be a "combo" tree with a few varieties grafted together. However one apple has taken over. Not quite a Granny Smith, and not quite a Golden Delicious. Just before they are totally ripe, they are tart like a GS, but if you wait, the skin turns pale, and the flavor is mild. The apples were about half still green and tart, and about half pale and mild. So I picked them all, and made applesauce. 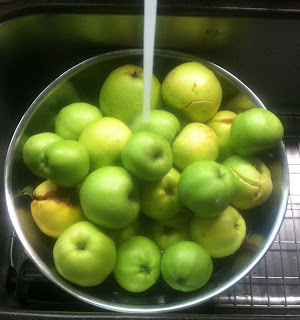 Add all the apples to the slow cooker, and sprinkle with cinnamon. Cover it up, and turn it on- I like 4 hours on low for my slow cooker.

Taste a spoonful once in a while, and when you like what you have, turn it off. I let it cool for a bit before moving them to a colander. You can use a colander, and a food processor, blender, or sieve- whatever you like.  My big colander has bigger holes- so my sauce is slightly chunky, and mashing it was pretty easy. This was good for me, since I left the skins on. It was easy to make without clogging everything up with skins. I used a potato masher, and set the colander in a large bowl (to catch the sauce).

This was a small batch that won't last long, so I just put it in a few quart jars, and into the refrigerator. If I have a chance to pick apples again this year, and make a larger batch, then I will actually can the applesauce. Another option is to freeze it.

Posted by Leslie @ NE Portland Bungalow at 9:58 AM No comments:

I hope this link works, because this video is pretty hilarious!

Just made this recipe. It's actually an original recipe. I read a few others, and figured this would get me in the neighborhood of a brownie.


Heat over to 325F. Grease baking dish with coconut oil.
Combine almond flour, tapioca flour, palm sugar, and salt, then set aside.
Melt butter and chocolate chips. If using cocoa powder, you may want to add that to the dry mix, not the melted butter.
Stir chocolate and butter into dry ingredients.
Mix in eggs.
Pour into greased baking dish.
Bake for 20-25 minutes.

Since this is my first attempt with this recipe, I have no idea if it's going to be good. Maybe I should have poured extra chocolate chips on the top. We'll see what happens. The brownies should be done in about 5 minutes.
Posted by Leslie @ NE Portland Bungalow at 5:25 PM No comments:

Thanks for coming by!